The dreaded last day finally came. Nooooo why can’t I travel forever? As I’m writing this post I’m looking at the calender for any potential trips.

My friend and I woke up bright and early to do(eat) as much as we could before we had to go to the airport at approximately 3pm. So we checked out, kept our luggage at the lobby, and set out to try Nagoya’s famous morning set. The way you order a Nagoya-style morning set is quite unique. Instead of providing complimentary drinks to dishes you choose, the morning set provides dishes to the drinks you choose. So, if you were to order a hot coffee, you are given a slice of hot toast and for a small fee can add a red bean spread. This red bean toast is called Ogura toast, and apparently became so popular a version was made and introduced to convenience stores all around Japan.

Komeda’s Coffee branches can be found all around Nagoya. The one we we went to was located inside Sakae station. Sakae station itself has numerous lines crossing through it so is HUGE. So there is a good number of shops and food spots inside the station.

Komeda’s has quite a large collection of drinks and food, including melon soda floats and fresh juice. We of course went for a cup of black coffee.

The service goes until 11 am, and as you can see they also have mini salad for just 200 yen. We also decided to order a ebi sando, shrimp sandwich, for good measure.

The coffee was nice and strong and came with a little mini pitcher of milk (or was it cream…? I don’t really remember).

The complimentary hunk of toast and boiled egg. The waitress asked if we wanted margarine and strawberry jam on the toast, and of course I said heck yes. The toast was nice and thick and was of the sweeter variety. The egg, like all eggs I had in Japan, was delicious as well.

Then, this came. Whoa. Cost about 500-600 yen and as you can see, one slice was quite hefty. The bread was huge, and the shrimp patty was huge as well. There was a kind of tartar spread and the perfectly crisp patty was laid on top of a bed of shredded cabbage. This portion could have easily served as a pretty hefty snack for three people. Could have fed one very greedy person.

The shrimp patty was crispy on the inside, nice and “bouncy” on the inside, due to the freshness of the shrimp. I will definitely be making this at home in the future.

After a hearty brunch, my friend and I headed to the Osu shopping arcade because we really, really wanted to play Mario Kart (don’t judge… we only have the wii version in Korea). It was in Osu where I found the most adorable thing ever in existence.

Cat sushi. Also called neko sushi. Why you so cute??? Especially the first one with welsh onion and a lobster… I really wanted to get that one. But as you may know if you have experience with toy vending machines (I don’t know if you’d call them vending machines, but you add coins and turn a knob to get the product), you don’t know what you’re going to end up with. The one I really wanted was the first one. The one I wanted least was the last one on the right, the cat with the pink backpack.

I put 400 yen into the little slot and turned, my hopes high for the welsh onion kitty.

I held my breath as I opened the little plastic ball. I had a strange sense of dread because of the pink color of the top bit of the plastic ball, but I shook my fears away and tore into the wrapping.

Lo and behold. My worst fears came true. Kitty with pink backpack. This goes to show why you should live without expectations so you won’t be disappointed. But, in the end, pink backpack kitty is better than no cat sushi so I was happy nonetheless. My only regret is that I didn’t get another one. Sigh… until next time welsh onion kitty. 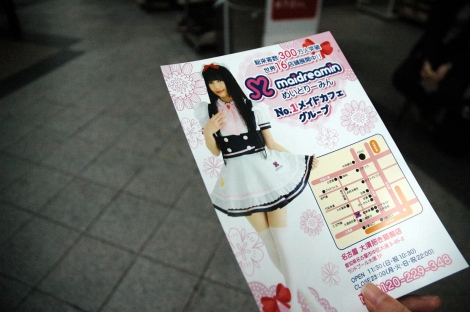 There were a good number of maid cafes around the Osu area, and the “maids” stand outside to hand you flyers.

After a couple of games of Mario Kart, we were getting pretty hungry so opted for some takoyaki which tasted different from the kind I’m used to. There was less of a outer dough casing and much more pickled ginger. Takoyaki always tastes good. 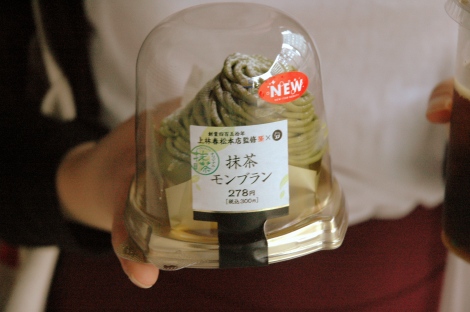 Then we went shopping until it was time to get back to the hotel. We discovered a new cake in the combini, which looked like a matcha version of my favorite, mont blanc. It was raining pretty hard so we took cover under a random storefront and unabashedly chowed down on the cake, as any classy ladies would do in the same situation.

Pardon the awkward spoon-holding. I made my friend hold both the coffee, the cake, and hold the spoon with some cake on it for photographic purposes haha. Like I have said over and over again, I have never been disappointed by any item I bought at the combini, especially the pastries and cakes. A sweet end to a perfect weekend getaway.

As you can see with all of my posts on Nagoya, 1 2 3, this trip was very short and very laid back. We didn’t explore the outskirts of Nagoya, and we didn’t eat at fancy restaurants. We only spent about 250,000 won per person for food and lodging, so we didn’t really have that much of a budget, hence why we hit the combini so often for many of our meals. But if you want something both cheap and delicious, combinis are amazing. I never felt deprived or sad because I wasn’t able to eat something. Overall, I thought that Nagoya was a pretty charming city. Not as big and not as much to see compared to Osaka or Kyoto, but was a nice place to escape reality for a few days. If I have another short holiday, I would definitely go to Nagoya to hit the onsens during the winter.

And that wraps up my short adventure to Nagoya, Japan! Stay tuned for other posts coming soon 🙂